“Dreams don’t work unless you do!”

So the day had finally knocked on the door. It was my first interview in Germany.

With all the excitement and nervousness and lots of blessings, I left my room at 5:30am. I had a train to Nuremberg, where I had to change to another train for Stuttgart. It’s Germany, so being on time is a must not just for people but even for all transport system. I reached Nuremberg, stomach already growling with hunger but I was keeping myself up with chocolates and water (Another great tip from the same person who prepared me for the interview). From Nuremberg, changed train to Stuttgart. I reached Stuttgart an hour past noon.

My friend from Heidelberg was coming to just meet me and give me all the support I needed. He reached Stuttgart an hour before me and waited. Now I got down the train, and the first thing I realize is – this is huge! Compared to the simple, quiet life in Chemnitz, this was chaos. People everywhere (not something you see in Germany). I started following the directions, and my friend told me he was waiting in front of a store. Easy to find right? – or so I thought. Now, for a first timer such as myself, I didn’t have a clue that the main station had 4 levels. He was on one of the levels and I was another. Apparently, he didn’t know this either. 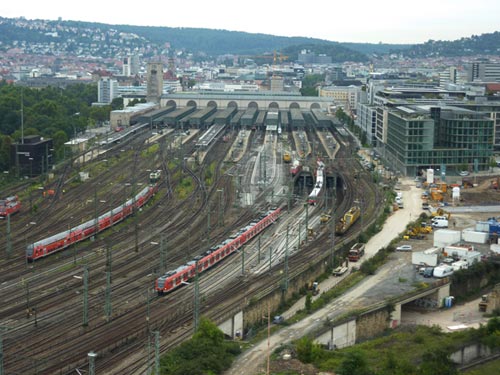 After spending 43 precious minutes, we met outside city information center outside the station. Grabbed a bite to eat and off we left to catch the train to reach for the interview. Now I had taken my formal shoes in bag (for obvious reasons, I possible couldn’t run in formal shoes). We reached 10 minutes before the appointed time and I entered the office.

Since, I have never worked in an organization before, I was awed by the building, interiors, surroundings, everything! Longest 10 minutes ever!

The human resources personal had just entered. After a brief introduction in German, heart beating so fast and fingers crossed, I followed her into a meeting room.

After about 10 minutes of talking, entered two senior managers from the department I applied for, and thus began my interview.

Discussion about myself, studies, courses, extra activities, family, India, projects and finally my future plans took place extensively (Like every other interview).

After exactly 95 minutes of German and English fusion and my palms sweating under the table, as if I were in a desert, they asked me have juice or water and wait until they made their decision.

I suddenly realized, I had exactly 1 hour to catch ICE. Shit. This was not expected.

Hence, I continued waiting in that meeting room, trying to figure out all possible replies I may get in the next 600 seconds.